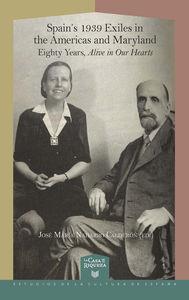 Spain's 1939 Exiles in the Americas and Maryland

Comprar
Exile, a global phenomenon, touched about half million Spanish Republican refugees at the end of the 1936-39 War in Spain. Contrary to Mexicos sheltering, the USA mainly admitted a select group of intellectuals: notably, Zenobia Camprubí and her partner, the 1956 Nobel Prize for Literature recipient, Juan Ramón Jiménez (University of Maryland 1943-1951), or a few progressive women (Carmen Aldecoa, Carmen de Zulueta) who joined other schools and universities.
Nevertheless, widely supported relief organizations and leftist publications channeled aid for the exiles, and rose antifascist awareness for US intellectuals such as Noam Chomsky. Contributions herein this volume, generated during an international symposium at the University of Maryland, eighty years later, will illuminate readers on the depth of Spanish exile studies in the Americas, and some lasting contributions from this significant group of witnesses.